I’m asked questions every day or two by aspiring authors, people who are in this publishing game but are as yet unsatisfied with their results. I’ll attempt to give my views here, perhaps it will help.

If you’re happy with a sale or two a week, then fine, most of us can achieve that easily. I envy these people in a way, they aren’t looking to make a living, they’re only out to perform their art, share it with the world, and let the chips fall as they may.

In my case, now that I’ve been somewhat successful, I’m accustomed to reaching bestseller charts with every book, and I naturally want to continue to do so. For me writing isn’t just self-actualization anymore. I have bills to pay with my work. This places me into the category of a professional writer. 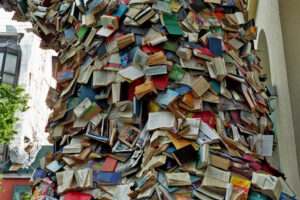 The route to becoming a successful, professional author is much rougher. If you want to be someone who is visible on the bestseller charts, who has a number of titles with good honest reviews and who makes enough money to live off your writing…well, that requires a combination of three things: luck, talent and hard work. Of the three, the only one that is under your control is the part about the hard work. That’s the one to concentrate on.

What do I mean by “hard work”? Let me start by explaining that this is an unforgiving game. In fact, it is a desperately difficult game, with literally hundreds of thousands of competing players who are just as determined to win as you are. I visualize it as a pyramid of struggling forms, a pyramid comprised entirely of the fallen bodies of past combatants who’ve given up and succumbed. Those books still in the fight are working their way up or tumbling down. There can only be one book at the top, which invariably has a circle of masters around its feet, each of which is trying to pull the leader down—and let us not forget about the thousands at the bottom of the hill, staring up with envy and greed…

In my own case, I’m sure I had a modicum of talent and luck in the mix, but hard work was definitely the primary contributor to my success. Anyone who thinks I got lucky should open their desk drawer. Do you have around a thousand rejection letters stashed in there? Have you written at least ten books without gaining a dime? Have you taken scads of college writing courses, read a dozen books on writing cover to cover repeatedly, and studied every author in your genre of choice, outlining their works? If not, you have yet to meet my standard of “hard work”.

Bowker, the dispenser of ISBNs, recently released staggering figures on the numbers of self-published books reaching the foot of our mountain every day. The year 2012 saw a 59% increase over 2011…that’s 391,000 new ISBNs cut for self-publishers last year alone. Since 2007, the number has increased a shocking 422 percent. There is no sign that this trend is slowing down. The mountain is growing, ever faster, while the space at the top is not.

How does one win in such a mosh-pit of books? How does your work rise to the top? Many believe it should do so naturally without aid if the work is strong enough. This is simply not true. I’m convinced there are good reads way down there in that heap, forgotten and abandoned. Maybe they had a blank cover, or a description with two misspellings, or a title no one could comprehend. Any mistake like that will dash your hopes. As an independent author, you possess all the power and all the responsibility with regard to your success. You must train yourself to be an expert on covers, blurbs, and marketing techniques, as well as the various sales site search systems and more. Writing a good book is no longer enough.

If this sounds like more effort than it’s worth, you’re probably right. It’s time to move on—immediately. It doesn’t get any better, not even once you’ve managed to master the basics.

I remember watching a show called “Kung Fu” as a kid. The star was an unfortunate fellow named David Carradine. He played a Shaolin priest. As a youth he sported a shaved-bald head and was tasked with sweeping ancient stones with primitive witchy brooms. One of a hundred lowly sweepers, they were all taught the martial arts with one thumping, pain-filled grunt at a time. By the end of the opening credit montage, he was rewarded as an adult by the gift of agonizing self-mutilation. Branded with a tiger and dragon image on either forearm, he was finally allowed to exit the monastery and enter the real world—which turned out to be chockfull of vicious hooligans.

That’s how I view the modern publishing world. Success requires vast effort, and as a final reward, we’re all doomed to be branded with unfair one -star reviews.

All complaining aside, I do love the life, and I wouldn’t have it any other way.

Welcome to the foot of my mountain, pilgrim, and fare thee well.

An Ode to the Indie Author